Brazil has the largest economy in Latin America and has one of the most promising ecommerce industries in the world. The country’s huge consumer market is eager to purchase international goods and services. There are some peak shopping periods when Brazilians are most active on the internet and on the lookout for the best deals they can get.
On this article, we have compiled a list of the most important ecommerce shopping dates in the country. It is aimed at merchants who want to successfully penetrate the market, build long-lasting relationships with their customers and sell in Brazil year-round.

The most important ecommerce shopping dates in Brazil

Brazilian business owners have been using Consumers Day as a commemorative date since 2014 as a response to a time of slow market movement. This serves as a perfect example of how the calendar can work as a marketing tool. This strategy helps create a better relationship with customers – strengthening bonds, even.

As for revenue, from 2015 to 2016 companies recorded a growth of 18% on Consumers Day. Buyers spent up to BRL 236 million, or USD 63.278 million. The average ticket was BRL 470.00, an equivalent of USD 126.02. The most popular categories were Cosmetics, Fragrances, Health, Books, Home Appliances, Fashion and Accessories, Home and Decor, and Electronics.

Besides that, Consumers Day an excellent time to segment your mailing. Consumers who have already bought products from your ecommerce can make new purchases with special conditions. This will also help you retain customer loyalty.

According to research, up to 90% of Brazilian consumers have given up on a purchase because of shipping costs. This is what makes Free Shipping Day one of the most lucrative days for ecommerce in Brazil. It usually happens on the last Friday of April. In 2017, the date was such a success that some sellers gave their customers an extra day of free shipping! One of the reasons that make this date such a big hit is the proximity with Mothers Day.

While free shipping can be difficult to arrange for international online companies, there are shipping modalities that aren’t really that expensive. Considering that Free Shipping Day only happens once a year, over the span of 24 hours, it is worth considering this offer for just this one day so you will have a clear notion of how this date impacts your ecommerce sales.

Besides being a great marketing strategy, it can bring a whole lot of new customers that had never purchased at your store before.

Mother’s Day is celebrated in Brazil on the second Sunday of May. It is one of the most lucrative ecommerce dates for Brazilians. It ranks second as the busiest ecommerce shopping date in the country. The first one is Christmas. According to E-bit, online shoppers spent BRL 2.11 billion this year. That is over USD 565 million. That number represents a growth of 12% compared to the previous year.

It’s important to plan ahead since it’s an important event. Merchants can start their marketing campaigns as soon as 50 days in advance.

Brazilians usually gift their mothers, grandmothers, godmothers and all mother figures in their lives. The gifts come in all forms. They are personal items, like expensive clothing, luxury accessories, high-end makeup, jewelry, and fragrances. But since each mom has a different personality, there’s an opportunity for each segment. Whether you’re in tech, sports gear, house appliances, house decor or literally any other segment, you will make a profit of this date as long as you are strong in your marketing game. The average ticket of products is also very high.

Brazil celebrates love on June 12th, known there as ‘Dia dos Namorados’. It’s quite similar to Valentine’s Day in the United States and other English-speaking countries. Couples usually celebrate this date together over dinner after work hours and exchange personal gifts. The date is huge for both retail and wholesale.

There’s a wide range of gifts that can be exchanged during Dia dos Namorados. In 2018, the segments that sold the most were Beauty and Health, followed by Fashion and Technology.

This year, each online shopper spent on average BRL 235.17, or USD 63.06. Only 8% of people who purchased gifts for Valentine’s Day in Brazil bought them from an ecommerce they were already a client of. This is great news for those trying to reach a new clientele.

For those in wholesale, there is a high demand for Valentine’s themed decoration. Heart-shaped paraphernalia and pink and red decorations can be seen from up to a month in advance. They are in storefronts, businesses, schools, and even public spaces throughout the country.

Brazilians spent around half a million dollars in online shopping for the date.

Brazilians celebrate their dads on the second Sunday of August. While the date is not as lucrative as Mothers’ Day, it still brings a lot of money to ecommerce in Brazil. The most popular segments during this time of the year are:

According to the Brazilian Association of Electronic Commerce (ABComm), it is expected that Brazilians will spend BRL 2.2 billion on Fathers’ Day in 2018, over USD 589 million.

Children’s Day is celebrated in Brazil every October 12th. It’s not uncommon for some children to have a week off from school, and there’s a high expectation surrounding this date. They are usually gifted with toys. The most popular ones will be the novelties. It’s towards Children’s Day that the companies in the segment release new items. Keep an eye out.

Children’s Day is like a small taste of Christmas will be like, for both children and business owners. While kids will try to guess what kind of gifts to expect under their Christmas tree, business owners use the date as a thermometer of the economy towards the end of the year.

In 2017, ecommerce has seen a 20.9% growth during the Children’s Day period. The use of coupons was very popular, with an increase of 130% compared to 2016. The most sought-after toys were fashion dolls, superhero action figures, bikes, miniature cars and board games. Parents usually buy the gifts, but other adults in the children’s lives also take part in this holiday.

Black Friday has successfully crossed borders and established itself in Brazil. Despite being a recent event, it’s already long awaited by Brazilian consumers. They are savvy for promotions and willing to wait for a few months to purchase their most desired items for lower prices. Cyber Monday events or even Black Week events are also increasingly popular in November.

Ecommerce stores of all segments have adhered to the shopping holiday in Brazil.

The Chinese Double 11 happens on November 11th. It is becoming increasingly popular around the globe, with sales even surpassing Black Friday’s, and Brazil is picking up on the trend.

The idea behind the date is to celebrate Singles’ Day, a sort of anti-Valentine’s Day. November 11th, or 11/11, is the day with most “ones” on the calendar. The symbology behind the loneliest number is the connection with the status of being single. On Singles’ Day in China, young people gather to eat, drink and exchange gifts.

Ecommerce in China took the opportunity to make Double Eleven a sort of shopping holiday marked by huge discounts. Numbers are being recorded since 2013. In 2017, sales in Alibaba’s sites, Tmall and Taobao have reached a record of USD 25.4 billion.

Christmas is the main shopping date for Brazilian ecommerce by far. The holiday season moves all segments. From Apparel to Toys, passing through Fragrances, Cosmetics, Home Appliances, and Electronics. During Christmas time, ecommerce in Brazil is definitely the busiest time of the year. Besides the obvious, one particular reason is the 13th paycheck, a sort of bonus that all registered workers are entitled to.

Culturally, the whole family exchanges gifts. It’s common to hold a Secret Santa at the workplace, in schools, and between friends.

Ecommerce sales during Christmas of 2017 represented a total of BRL 8.7 billion, or USD 2.332 million. A growth of 13% compared to the same period of the previous year. The number of orders also increased by 13%.

Disclaimer: The currency conversions on this article were provided by Google on July 31st, 2018. You should confirm current rates before making any transactions that could be affected by changes in the exchange rates. 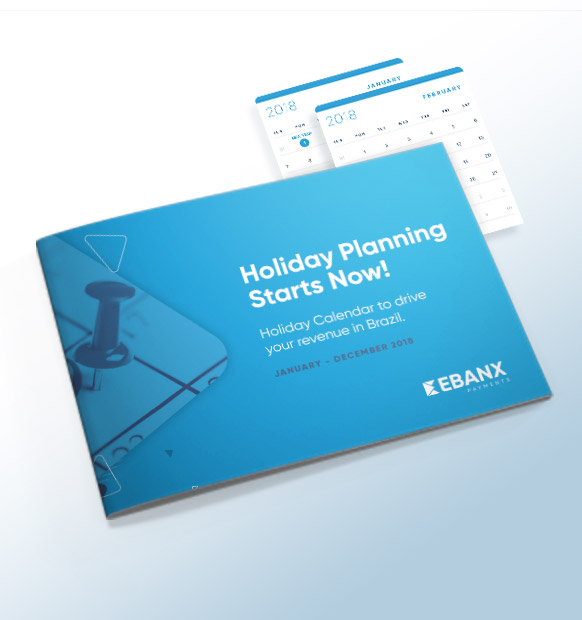 Plan your sales in Brazil.

Get the full 2018 Best E-commerce Holiday Dates in Brazil Calendar and don’t miss any sale.