At the end of last year, changes on the Boleto Bancário, or boleto for short (a very traditional Brazilian cash payment method) started to appear on the news and also started to preoccupy business owners that offered this payment method to its customers. Adjustments to the new rules were supposed to be effective in March, but have been postponed to the middle of this year.

Since July 10th the New Billing Platform (Nova Plataforma de Cobrança in Portuguese) is valid in Brazil, developed by the Brazilian Federation of Banks and the Brazilian banking network with the goal to modernize this 24-year-old system.

But what is this New Billing Platform and what impact will it have on the commerce and payment flow? What exactly changes for companies and people that offer the Boleto Bancário as a payment method for the ones that buy their products/services? And what will be different for the customer?

In order to answer these questions, let’s take some time to remember how the Boleto Bancário’s system was before the New Billing Platform started to operate.

How Were Things Before?

From the point of view of the providers (companies or people that offer the Boleto Bancário as a payment method for their clients) this was the scenario until the beginning of July, 2017: when requesting the issue of the boleto at the bank of their preference, sellers could also request the enrollment of this boleto at that bank. This way, the boleto would be registered in the institution.

How is it Going to be From Now on?

In order to promote this centralization, companies and people who sell services or goods and offer this particular payment method will have to inform their bank about the issued boletos and about who is going to pay them. In other words, they will only issue registered boletos. In order to do it, they will continue to collect their customers’ data, such as CPF (Cadastro de Pessoa Física in Portuguese), a Brazilian tax ID for people, and CNPJ (Cadastro Nacional da Pessoa Jurídica in Portuguese), a Brazilian tax ID for companies. Then, they will pass this data to their boleto’s issuer bank, which will feed the central (New Billing Platform).

It is because of this centralization that consumers will be able to pay expired boletos at any of the authorized places, and not just at the issuer bank’s agencies (like it was before the creation of the New Billing Platform). When receiving an expired boleto issued by another bank, the institution will be able to access all of this boleto’s data on the New Billing Platform and calculate all the fees and interest due to the delay in accordance with the rules of the issuing bank. 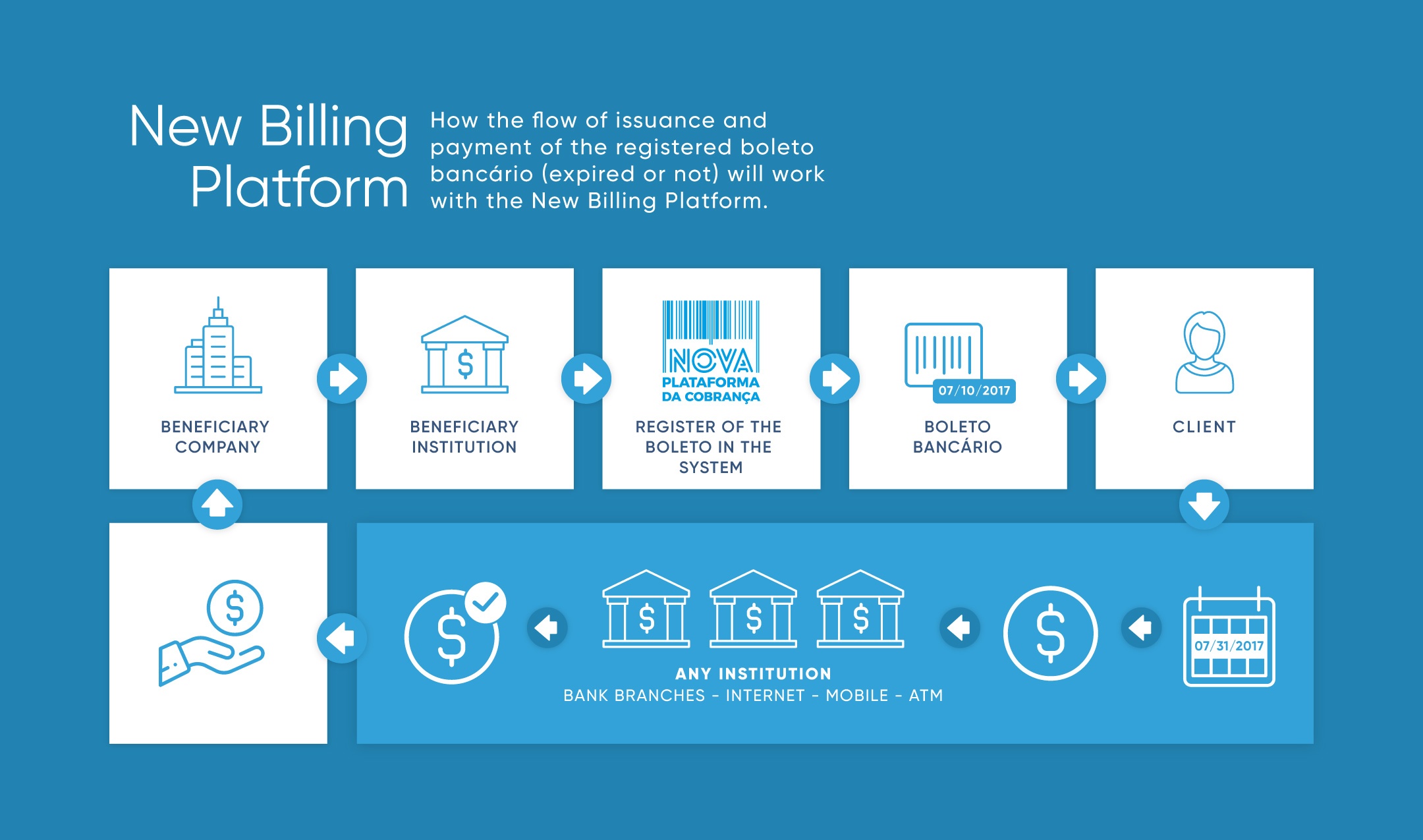 So this Means Clients Can Pay the Boleto Whenever They Feel Like it and my Business Will Have to Guarantee the Product/Service?

What is generating a lot of confusion for online vendors and online service providers is precisely the possibility that consumers will have to pay expired boletos at any authorized place. Many e-commerces are thinking that customers will be able to generate boletos in their websites and pay them whenever they want — days, months or even years after the expiration date —, forcing these e-commerces to serve these customers at any moment in which these boletos’ payments are confirmed.

This thought is wrong for a very simple reason: the kind of boleto with which e-commerces work with is the Boleto de Proposta (boleto of proposal), also known as Boleto de Oferta (boleto of offer), according to Central Bank of Brazil. This type of boleto presents a product/service proposal to the customer. By paying this boleto, the customer will be accepting the proposal. Not paying the boleto until the expiration date means that the customer is declining the proposal and makes this boleto disposable, not implying the insertion of this customer into credit restriction registers, nor the e-commerce’s obligation to maintain the product or service reservation.

Keeping all of this in mind and taking an online store of clothes as an example, we have the following scenario: if a customer don’t pay the boleto generated during a t-shirt purchase until this boleto’s expiration date, it means that this customer doesn’t want the t-shirt anymore. Without the payment confirmation, the e-commerce doesn’t send the product. If by any chance the customer changes his/her mind, he/she just need to enter the website again, ask to purchase the t-shirt again and generate the boleto again, with a new expiration date.

This scenario is a lot different from the one of Boleto de Cobrança (billing boleto), the other boleto type according to Central Bank of Brazil’s regulation. This one is used to pay for already incurred debts. In other words, paying it until its due date is an obligation and failing to do so implicates fines, interest and even service cuts or product retention. This kind of boleto is used for electricity, water and credit card bills, for example.

Will I or My Company Spend More Money by Issuing Only Registered Boletos?

The fee paying and the prices are negotiable: some companies manage to make deals with their banks in order to pay only for the compensated boletos, even if they are all registered ones. It’s a matter of negotiating with your bank.

Will All Boletos be Legally Enforced With the New Billing Platform?

No. Many have been mistaking the registration in the bank for the registration in the notary office, this last one being usable when the beneficiary wants to legally enforce an unpaid boleto. When this is the beneficiary’s wish, he/she can do it, and this will lead this non-payer to enter the lists of credit protection. This possibility already existed before the New Billing Platform’s creation, for both registered and unregistered boletos, and will continue to exist.

Yes. According to the Brazilian Federation of Banks’ material about the New Billing Platform, unregistered boletos can still be issued as long as it is an agreement between the beneficiary and the issuing bank. Still, there is a very important fact that must be taken in consideration: with this changes, unregistered boletos can only be paid at branches of the issuing bank, even before its due date.

One of the new system’s intention, according to the Brazilian Federation of Banks, is to reduce fraud incidence. Every time a client pays a boleto, either in person or through internet banking, the bank will cross the document’s information with the central’s data. If the information doesn’t match or doesn’t exist on the New Billing Platform, it’s one way or the other: the boleto is unregistered or fraudulent. Either way, it is necessary to go to an agency of the issuer bank.